Module:Stonewall: The Battle of Kernstown 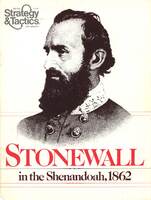 Stonewall is a grand tactical, regimental simulation of the Battle of Kernstown, March 23, 1862. The players recreate the encounter between Major General T.J. 'Stonewall' Jackson's Confederate Valley Army and Brigadier General James Shield's Division, part of the Union Army of the Potomac.

The game uses a Combat Effectiveness Chart to track units' morale and fatigue along with rules based on the popular Terrible Swift Sword: Battle of Gettysburg Game game system and which was later developed into the Great Battles of the American Civil War system.

Victory points are awarded both players for certain objectives and for enemy unit losses. The player with the higher total wins, with the difference in points determining the level of victory.

Each Game-Turn represents 20 minutes of real time, each hex covers about 125 yards from hexside to hexside, and each Strength Point is the equivalent of 100 men or 1 gun.

NB this is not my module, but one I have on file. If it is your work, thanks - please edit and take the credit!

v1.0: Edited to include Rebel commanders and to fix the name of one Rebel battery

Retrieved from "https://vassalengine.org/w/index.php?title=Module:Stonewall:_The_Battle_of_Kernstown&oldid=68055"
Categories:
This page was last edited on 25 July 2021, at 22:01.
Content is available under Creative Commons Attribution-ShareAlike unless otherwise noted.
This page has been accessed 592 times.
Privacy policy
About Vassal
Disclaimers