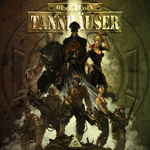 Comment by James 10/9/15: Don't be afraid of the French, the whole game uses mostly picture icons. There is barely any French text you need to read in the module itself. Also, since there is no rules integration in Vassal, only maps and token pictures, you can easily use this module with the latest for-sale revised ed. Fantasy Flight rules.

This is the last-known-good version (3.04) of any Tannhauser module. Mostly in French, this module was officially sanctioned (at the time, by Take On You [TOY]) and reflects the product line's state as of TOY's (which predated Fantasy Flight's English release) release of the Novgorod expansion. With FFG's subsequent "v.2 reboot" of the system rules, this module does not remotely reflect current gameplay. That said, it's a start should someone decide to revisit this module in order to bring it current with FFG's subsequent reworking of the product line while also closing out yet another dreaded "status unknown" entry in the module wiki.

Tannhäuser is a tactical board game of paranormal investigations and Great War combats.

Copyright Take On You Ltd. All rights reserved.

Tannhäuser is a tactical board game of paranormal investigations and Great War combat, pitting the forces of the Reich and the Army of the Union together in a struggle for control of the Obscura Cardinal Cornerstones, magical artifacts of immense power.

2-10 players command two teams of five characters, both Heroes and Troops. Since there are up to ten characters on the battlefield at any given time, up to ten players can take part!

GAMEPLAY The Obscura Korps and the men and women of Operation: Tannhäuser battle for supremacy in each game of Tannhäuser. According to the Game Mode selected by the players, the carefully-selected and equipped members of each team will strive to accomplish various objectives on the game map, guided by the ubiquitous Pathfinding system.

Tannhäuser uses an innovative new system for tracking movement and line of sight called Pathfinding. Each area on the game board is represented by a circle, and each circle possesses one or more colors which will indicate which Path (or Paths) the circle is on. Circles that share colors and are on the same Path have line of sight to one another.

For example, all of these grey circles are on the same Path.

The circles near the doorway are both grey and red - they are on both the grey and red Paths, and can see and be seen by all the circles on those Paths. Put another way, a character standing by the doorway can see both down the hall (red Path) and into the room (grey Path).

As you can see, the Pathfinding system makes it easy to calculate line of sight, range, and the other details of science-fiction horror combat!

Each team is comprised of a mixture of five Heroes and Troops, characters with unique and varied abilities, statistics, and equipment options. Players have the ability to select which pieces of equipment, special skills, and commendations to award each character when they select their team for a given battle, so each individual character may play dramatically differently each time it is brought to the field.

Heroes and Troops function identically in most respects. The most notable exception is that fallen Troops can be replaced by reinforcements, depending on the Game Mode selected by you and your opponent. When a Hero falls, that Hero's story is over.

Players will take it in turn to activate a character on their team, alternating until all characters have gone. On its activation, each character can move a number of circles equal to its speed and also take a single Action Phase, during which time the character can perform various actions such as picking up dropped equipment, searching a crate, completing a nearby objective, or, of course, attacking an enemy.

To resolve most actions, such as attacks, characters will roll ten-sided dice (d10s) equal to their corresponding value in the appropriate characteristic. Each die that rolls equal to or greater than a given difficulty value is a success; each die that fails to do so is a failure and is ignored. In contests, the defender will also roll his own die pool - whichever character scores the most successes is the winner of the contest.

The requirements for winning each game are based on the Game Mode selected. For example, Death Match Mode awards victory to the last team with any characters still standing. Story Mode, on the other hand, places various objectives that must be completed on the game map. The first team to complete both their Main Objectives, or one Main Objective and two Secondary Objectives, is the winner of that match.

With a variety of options for customizing each team (and options that will grow only wider with the addition of new expansions in the Tannhäuser line), four Game Modes, and endless possibilities, TannhÃ¤user is a compulsively replayable game experience.

Retrieved from "https://vassalengine.org/w/index.php?title=Module:Tannhauser&oldid=45223"
Categories:
This page was last edited on 9 October 2015, at 20:30.
Content is available under Creative Commons Attribution-ShareAlike unless otherwise noted.
This page has been accessed 678 times.
Privacy policy
About Vassal
Disclaimers