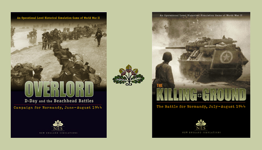 This module allows players to play single map Overlord and full map Overlord / The Killing Ground scenarios. In addition to single-map and triple-map free setup scenarios, it also contains 10 scenarios, including a heretofore unpublished Closing the Pocket scenario which focuses on the Falaise Pocket operation.

Each scenario contains Scenario Notes which should be read prior to playing as some scenarios have additional setup operations to do before starting. The module contains a Scenario Notes button in the toolbar.

In addition to applying previously published map and counter errata corrections, Mark Hinkle of NES has graciously provided us with a 3rd Edition CRT, which adjusts some result distribution anomalies in the originals.

Thanks to Andy Tromans, this new version includes:

Retrieved from "https://vassalengine.org/w/index.php?title=Module:The_Killing_Ground&oldid=62305"
Categories:
This page was last edited on 26 July 2020, at 22:10.
Content is available under Creative Commons Attribution-ShareAlike unless otherwise noted.
This page has been accessed 730 times.
Privacy policy
About Vassal
Disclaimers