Module:The Lord of the Rings: The Card Game 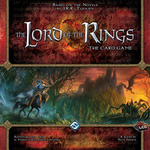 Although this game is set in Tolkien's Middle Earth, the scenarios do not represent scenes from the books, but rather take place in the seventeen years from Bilbo's birthday until Frodo's departure from the Shire.

This game is limited to material that has been released at least 6 months prior.

Version 2.0.0: Fixed some minor bugs and added Journey to Rhosgobel, The Hills of Emyn Muil, The Dead Marshes, Return to Mirkwood, The Massing at Osgiliath, and Khazad-dum

Version 2.0.1: Added a missing image to The Hills of Emyn Muil

Retrieved from "https://vassalengine.org/w/index.php?title=Module:The_Lord_of_the_Rings:_The_Card_Game&oldid=64189"
Categories:
This page was last edited on 16 December 2020, at 18:51.
Content is available under Creative Commons Attribution-ShareAlike unless otherwise noted.
This page has been accessed 1,022 times.
Privacy policy
About Vassal
Disclaimers