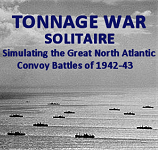 Tonnage War is a solitaire game simulating the great North Atlantic convoy battles of 1942-43. The player controls the anti-submarine escorts protecting a convoy of Allied merchantmen, while the German U-boats attacking the convoy are portrayed through the mechanics of the game system. The game comes complete with a full set of rules and 8 scenarios depicting some of the greatest Atlantic convoy battles of WWII. Scenario play runs from as little as 20 minutes to about 3 hours. The module is designed for the easy creation of new scenarios. The game was designed by Leonard Heinz, and the VASSAL module was created by Richard Dionne. Leonard's website describing the original game can be found at the following location.

Retrieved from "https://vassalengine.org/w/index.php?title=Module:Tonnage_War_Solitaire&oldid=62196"
Categories:
This page was last edited on 26 July 2020, at 21:37.
This page has been accessed 715 times.
Content is available under Creative Commons Attribution-ShareAlike unless otherwise noted.
Privacy policy
About Vassal
Disclaimers