Module:War in the Outposts - The Europa Magazine 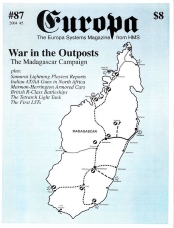 War in the Outpost - The Europa Magazine Version 0.9 (RWeston)

This module contains maps and counters for "battle scenarios" that were published in The Europa Magazine(TEM) for the Europa system. These battle scenarios were designed to examine real or hypothetical battles on the fringe of other theaters and were labeled as "War in the Outposts". Each of these battle scenarios are small in scope with few units and not many game turns.

The first battle scenario, Operation Icarus, was published in TEM # 65 and covers a hypothetical German Invasion of Iceland in the summer of 1940. British and Canadian forces react, and there is a small chance American forces may intervene in response to the invasion of neutral Iceland. With a moderate amount of land, air, and naval forces on both sides, this battle scenario seems to have some interesting game play and is probably the most interesting of the three. Some of the British brigades started at reduced strength due to losses in Norway. These units have a "Change Strength" command on their popup menu to switch back and forth from this reduced strength.

The third battle scenario, Invasion of Madagascar, was published in TEM # 87 and covers the actual campaign by British and Commonwealth forces to seize Madagascar from the Vichy French. With very few land, air, and naval forces on both sides and the longest game length, this battle scenario has little game play and was included for those interested in the history. I have also included a unit not listed on the game OB for the Allied forces. I have included a counter for the South African Squadron A, 1st Armoured Car Commando that participated in the campaign. It is considered to be "Light Armored" Type and 1/6 RE in size. This allows it to attack with another 1 RE size unit and achieve 1/7 AECA, adding +1 to the die roll. It should be added to the Sept I 1942 reinforcements.

I have also included a "Europa Template" VASSAL module. Anyone wanting to create a VASSAL module for one of the Europa games, can use this as a starting point. It includes a Game Turn/Game Year chart for the years 1936 to 1946, all known Europa weather zones, a victory points charts, and almost all of the game markers from each of the Europa games. This will save the module developer a considerable amount of time. I have also included prototypes for unit types that are common to most Europa games. I used the Europa Template as a start point for the War in the Outposts module.

Retrieved from "https://vassalengine.org/w/index.php?title=Module:War_in_the_Outposts_-_The_Europa_Magazine&oldid=61899"
Categories:
This page was last edited on 25 July 2020, at 23:42.
This page has been accessed 214 times.
Content is available under Creative Commons Attribution-ShareAlike unless otherwise noted.
Privacy policy
About Vassal
Disclaimers