Module:Way of the Ninja: Capture the Shoguns Enemies! 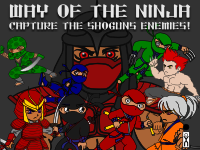 The Shoguns enemies have escaped! As a Ninja, you are tasked to capture them back. But beware! Your rival Ninjas are on the same task! It's an all-out war to gain the Shoguns favor! Who will win?

Way of the Ninja: Capture the Shoguns Enemies! Or simply WOTN is a card and dice game designed to be played by 1 up to 4 players of ages 12 years and above and can be played for a minimum of 30 minutes and onwards

This module is a work in progress. A lot of automation and fixes needs to be added in order to improve it. But even without automation, the game is playable in its current state.

Retrieved from "https://vassalengine.org/w/index.php?title=Module:Way_of_the_Ninja:_Capture_the_Shoguns_Enemies!&oldid=61918"
Categories:
This page was last edited on 25 July 2020, at 23:47.
This page has been accessed 124 times.
Content is available under Creative Commons Attribution-ShareAlike unless otherwise noted.
Privacy policy
About Vassal
Disclaimers