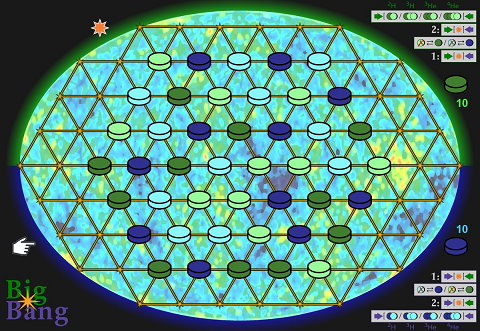 Big*Bang is an abstract game with a strong theme, the first minutes of our Universe. On an elongated hexagonal grid, one player tries to fuse protons and neutrons in order to form Hydrogen and Helium, while the other fuses antiprotons and antineutrons in order to form antiHydrogen and antiHelium. However, every turn they will have the choice: fuse their own nuclei, or annihilate the opponent's?

The three victory conditions (produce the most light through annihilation, form the most Helium, and form the most massive star) force players to find an equilibrium between the different options, that quickly shrink with the board as nuclei fuse and annihilate. The rules are simple, the playtime short, and you might learn some Physics!

Retrieved from "https://vassalengine.org/w/index.php?title=Module:Big*Bang&oldid=70536"
Categories:
This page was last edited on 1 March 2022, at 00:20.
Content is available under Creative Commons Attribution-ShareAlike unless otherwise noted.
This page has been accessed 185 times.
Privacy policy
About Vassal
Disclaimers