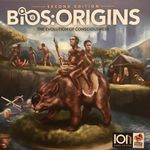 In Bios: Origins, you are one to four subspecies of predatory apes traveling through four Epochs of syntactic language development. At first, your calls are merely for external signalling (Epoch I). But then your words become internalized, to organize what you observe, solve problems or to store memories. Epoch II marks the sudden appearance of art: music, cave paintings, jewelry, figurines, and grave goods. In Epoch III, the origins of consciousness, you are able to reconstruct mental scenes with yourself as an actor: the first fantasies, free will, and sense of time. By Epoch IV, you are able to set your own goals for victory, which can be in religious, political, or industrial disciplines. As you progress through the Epochs, you set foundations and technological milestones for your civilization. If you suffer too much chaos, your core foundations become shutdown by dissidents. If they revolt, either religious, political, or industrial groups become the new ruling class.

Retrieved from "https://vassalengine.org/w/index.php?title=Module:Bios:_Origins_(Second_Edition)&oldid=61119"
Categories:
This page was last edited on 24 July 2020, at 23:36.
Content is available under Creative Commons Attribution-ShareAlike unless otherwise noted.
This page has been accessed 818 times.
Privacy policy
About Vassal
Disclaimers