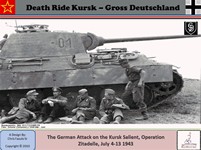 Version 4.0 is a combined GROSS-DEUTSCHLAND (DRK-GD) and 3rd PANZER Expansion (DRK-3Pz) module. It contains all of the DRK-GD maps (maps A, B, C, D, and E) charts and pieces, plus DRK-3Pz maps (map F), charts and pieces... and all ready to go.

The DRK modules (version 3.5 and version 4.0) are not very heavy (files around 20Mb), but the size of the map and the huge amount of pieces makes this module a good RAM eater. Increasing the Maximum JVM Heap Size to 1024 will solve problems related to RAM, helping the module to be loaded.

Also, enabling the preference "prefer memory-mapped files for large images" will help to deal with this issue.

The game features the Gross Deutschland Panzer Grenadier Division and some supporting XXXXVIII Panzer Corps units at mostly Platoon and some Company/Battery level and the Red Army (6th Tank Corps, 3rd Mechanized Corps, 67th Guards Rifle Division, 90th Guards Rifle Division, and many other supporting elements) at Company/Battery level. The combat system utilizes combat multipliers that players must use correctly to have the best effect. Each hex is 330 meters. Turns are 2 hours long during the day and 4 hours at night.

The rules are modeled around the seven battlefield operating systems which make them easily understood and easy to learn. Unlike other games at this level the rules will not be massive. This system features extensive use of obstacles (mines, wire, improved positions, and fortifications), a patrol rule, overwatch fire, air and artillery support, and reserve movement. These obstacles help channel the attack and force the Germans into kill sacks and forcing them to push through the heavy resistance to take ground. Overwatch is a type of fire that allows the player to move a short distance and then setup to fire suppressive fire at enemy units that might otherwise use opportunity fire. Reserve movement will allow a player to respond to enemy movement and move more units into a hex to strengthen it before an assault.

Units are modeled to represent the 2 major types of weapons that most units have. Secondary (usually small arms) and a primary (main gun, machine guns, etc...). These weapons may fire at different targets if they want. They also effect targets differently. Suppression is also handled uniquely in this game. Units that are suppressed get a defense bonus since they take better advantage of the terrain in the hex, while at the same time they have their other factors reduced. Units are also modeled as needing transports and get the benefits of movement from them with the vulnerability that goes with it.

The battle follows the divisions actions during the 10 days of the battle. The division operated with the 10th Panzer Brigade equipped with Panthers. The amount of armor in this game is astonishing. Panzer Regiment GD (110 including 15 Tiger I's), Assault Gun Battalion GD (35), 10th Panzer Brigade (200), 6th Tank Corps (180), 3rd Mechanized Corps (210), and a number of assorted assault gun units. Gross Deutschland has its 2 Infantry Regiments and supporting elements. The game will also force players to account for Command and Control and Supply. Maintenance and repair are critical to both sides as this determines most of the replacements that arrive every morning. Troop replacements are generated by returning casualties to the battle. Lots of these casualties are minor in nature and both sides worked hard to get these wounded back to the front quickly. Air-Ground Attack can have a significant effect on the battle and both sides have a capability in the air to affect the battle.

The Germans were eventually bled white and forced to suspend Citadel. The German attack starts facing only the soft crust and outposts the Red Army put in place to alert them of the assault's start. The Germans have overwhelming numbers for this first phase of the battle and must utilize this advantage to make every kilometer of progress they can.

As the attack develops the Germans must generate fast movement through this area and break free into the tactical second echelon quickly to keep from getting bogged down. The Soviets must use terrain and their considerable obstacles to slow down and stop the Germans in their tracks. The Soviets have 2 Guard and 1 Rifle Divisions, 1 Tank and 1 Mechanized Corps plus their supporting elements to stop the Germans.

Retrieved from "https://vassalengine.org/w/index.php?title=Module:Death_Ride_Kursk:_Gross_Deutschland&oldid=61280"
Categories:
This page was last edited on 25 July 2020, at 00:30.
Content is available under Creative Commons Attribution-ShareAlike unless otherwise noted.
This page has been accessed 716 times.
Privacy policy
About Vassal
Disclaimers