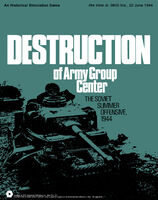 Destruction of Army Group Center: The Soviet Summer Offensive, 1944, is a simulation on a corps/division level of the Russian Summer Offensive of 1944 on the Eastern Front (Operation Bagration). Historically this offensive destroyed one entire Nazi Army Group, and prevented large transfers of men and equipment to the newly formed Western Front where the Anglo-American forces were expanding their beachhead in preparation for the August Breakout. The game covers the first twenty days of the offensive, during which all the decisive action took place. There are several scenarios, depicting a variety of likely possibilities, from the historical one through various degrees of German preparedness and 'sanity'."

Units represent Russian corps and Axis divisions. Stacking limit is 3 units/hex. Players alternate moves. Order of phases in each movement turn is: movement phase, combat phase, second mechanized movement phase. Semi-active zones of control extend into adjacent hexes, with some exceptions. Units pay two extra movement points to enter or leave an enemy zone of control, and may move directly from one controlled hex to another if they have enough movement points. Attacking is voluntary. Combat results involve unit eliminations, exchanges, and retreats, but the Axis mechanized units have a modified step-reduction mechanism (an eliminated Axis mechanized unit is replaced by a weak battlegroup which has no zone of control, and is worth extra victory points to the Russian player if it's eliminated in a later combat).

Victory is determined by victory points, gained by eliminating enemy units and, for the German player, for failure by the Russian player to have a continuous line from the north to the south board edge at the end of his turn.

Four scenarios are provided, ranging from the historical one where Hitler's propensity for issuing "Stand Fast" orders finally caught up with the Axis, to the maximum withdrawal scenario, in which the Axis essentially eliminates the portion of the front historically covered by Army Group North and uses the forces of that Army Group to strengthen the resulting greatly-shortened line in the Army Group Center area.

NB this is a test version, not a final release, feedback welcome

Retrieved from "https://vassalengine.org/w/index.php?title=Module:Destruction_of_Army_Group_Center:_The_Soviet_Summer_Offensive&oldid=66773"
Categories:
This page was last edited on 2 April 2021, at 16:44.
Content is available under Creative Commons Attribution-ShareAlike unless otherwise noted.
This page has been accessed 633 times.
Privacy policy
About Vassal
Disclaimers