Module:Divided America: The Next Civil war 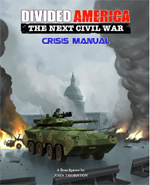 Divided America is a dystopian fantasy scenario about a second American Civil War amidst current day partisan politics. The game can be played with 1 - 3 players, representing two polar militarized factions and shadowy militia groups in between. An intriguing unknown strength system is at play for the militia, while the quality of the Black and White factions are best tested when they taste defeat in battle. Will they soldier on, bloodied but unbowed? Will they cease to exist as a cohesive force? Or, worst of all, will they turn coat and take up arms for "the other side"?

Retrieved from "https://vassalengine.org/w/index.php?title=Module:Divided_America:_The_Next_Civil_war&oldid=57845"
Categories:
This page was last edited on 20 September 2019, at 00:15.
Content is available under Creative Commons Attribution-ShareAlike unless otherwise noted.
This page has been accessed 415 times.
Privacy policy
About Vassal
Disclaimers