Module:Empire of the Rising Sun 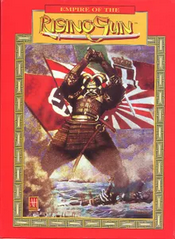 Version 0.9 notes (RWeston) This module will allow you to play Avalon Hill's Empire of the Rising Sun. I have added some features to simplify game play.

3. To make it easier to break down air, naval, and strategic warfare units, I have added Split Off Strength commands to these units. This way, if only some of the unit is damaged or eliminated, it is easier to break it down without having to fiddle with the pieces.

6. The Battle Board also has some markers used for game play. At the top left is a Magic Counters draw pile that only the US players can use to draw Magic Counters at the start of a turn. These Counters are initially hidden until the US players chooses to reveal them to modify a die roll. Only the Japanese player can click the Magic Counters label at the top and select the Return Magic Counters to the Draw Pile command. This allows the Japanese player to reset the Draw Pile at the end of a turn. On the bottom left and bottom right are Variants draw piles for the US and Japanese players. These can be used by the applicable player to draw their hidden variant marker(s) at the start of the campaign and then later reveal them at the correct moment. Once variants are drawn, there is no way to reset them. Finally, also at the bottom, are the Pearl Harbor Surprise Die Rolls markers. The US player can roll these at the start of the Campaign Game and the value rolled will be hidden until the US player chooses to reveal them to the Japanese player. Once the dice are rolled, there is no way to reroll them.

7. Strategic warfare counters can be hidden and revealed only by the applicable player.

8. The Tables button at the top will allow you to access all of the needed Air, Naval, Combat, SW, Reference, Resistance, and Sequence of Play tables.

10. I have created markers to indicate how many carriers a Battle Group contains (if required by Search Level) and whether it is transporting Sea Supply.

I hope everyone enjoys the module. If anyone has any suggestions or if looking for a game of Empire of the Rising Sun, then let me know.

Retrieved from "https://vassalengine.org/w/index.php?title=Module:Empire_of_the_Rising_Sun&oldid=70780"
Categories:
This page was last edited on 23 March 2022, at 23:32.
Content is available under Creative Commons Attribution-ShareAlike unless otherwise noted.
This page has been accessed 864 times.
Privacy policy
About Vassal
Disclaimers