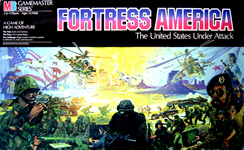 Fortress America, originally part of Milton Bradley's Gamemaster series, depicts an alternate near-future in which all of the world attacks and invades the continental United States. From the west arrives hordes of Asian foes; from the south arrives a union of South American countries through Mexico, and from the east lands come legions of Soviets who have taken over all of Europe. America besieged has to rely on the remaining ground and air forces left in the country along with partisan uprisings to defend mom's apple pie.

Retrieved from "https://vassalengine.org/w/index.php?title=Module:Fortress_America&oldid=66461"
Categories:
This page was last edited on 27 March 2021, at 21:05.
Content is available under Creative Commons Attribution-ShareAlike unless otherwise noted.
This page has been accessed 931 times.
Privacy policy
About Vassal
Disclaimers