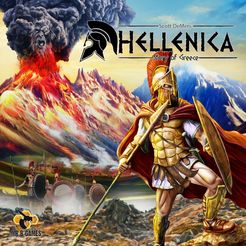 Hellenica: Story of Greece is a 3.5X civilization game in which you harness the powers of one of seven beginning city-states to dominate the world around you. Your goal is to become the preeminent symbol of Greece for all posterity by completing a combination of secret and public goals.

The approach I have taken in developing this module was to streamline as much of the cleanup/end-round phase as possible. While this really isn't an issue in synchronous games, I traditionally play VASSAL modules asynchronously. Thus having to pass around the vsav file for each player to do their bit seemed unnecessary.

For this to work, I have automated as much as I could with respect to managing cubes. When a user selects 'End Round'

All pieces which have no limit (City Upgrades and Government Markers) are available in a Game Pieces board which is made visible via clicking the appropriate button on the main title bar. The Mythical Creatures are also there in another tab mainly because I couldn't find a better place to stick them. Note that while there are an unlimited number of Mythic Creatures, I believe there should only be 1 available at any time.

I'm assuming that the reader knows the game well and is just here to understand how to use this module. The rules for Hellenica: Story of Greece are available on the according BGG webpage.

Also, Scott DeMers (all around awesome guy) Is highly active in the forums for Hellenica: Story of Greece. So, I suspect if you have any questions Scott is just around the corner to provide an answer for it.

They are located on the main menu button titled 'Game Pieces'. Click this will provide a window with three tabs. Once tab for each thing. To place a new City Upgrade on the map just drag-n-drop onto the appropriate site for that tile.

Each player has their own board. The boards are accessible via the following on the main menu bar. Each icon represents one faction. Players can see everyone's board (like in person), but only the faction owner can control it.

There is one die for each element:

I have yet to create the custom die for heros. So, I recommend the following mapping for the hero die:

Each player should click 'End Player Turn' when they're done with their turn. This currently does some internal house keeping and clears the movement tracks of any pieces on the board (like COIN).

End Round is used for triggering the End of Round housekeeping. This is long, so please be patient. You'll know when it's done because it will report so on the log.

Ending the round does the following:

There isn't any issues with clicking it multiple times if there are dominance issues (two markers in the same region for instance as a goof), so you can correct the above just by clicking it again.

There's a black button under the cards. What this does it it prepares the deck for play and then self destructs. You'll need to click it to prepare the deck.

Players just pull the cards from the deck onto their player board. They can select the ones they want and for those they don't just right-click 'Return to Deck'. For marking when a player has achieved one of the three Pathos, just have them place one of their occupation markers on the card.

Players are able to flip their cards via right click selection to prevent other players seeing them if they view their player board.

It's located on the board under the World Event Deck. Right clicking and selecting 'flip' on the marker will switch it to either the Hera or Zeus side. To track who's 1st player that round I'd recommend just placing it over the matching faction on the turn tracker at the bottom.

Have each player (starting with 1st player) pick three tiles off the rival diety deck. Then they can choose one and return the rest to the deck for the next player. The deck is set to constantly shuffle so people won't get the same deity twice in a row (unless luck has it). Once a player has chosen their 1st Deity, they must indicate that by placing the appropriate marker under their initial temple. This is accomplished via right-click menu on the Temple in the home city. Each Temple has this ability, so a player can choose or change the Deity for each temple as desired.

If you want to play with Rival Deities then after everyone has picked their 1st one, just drag/drop them into the corresponding spots on the board.

The Chaos track is set manually via +/- buttons at the end. It starts that the top (as per setup) and then moves according to the buttons. '-' is down, '+' is up.

Use an Occupancy Marker to indicate that your faction has achieved this.

The playerboard has all pieces to play the game. Cubes are automaticaly provided based on technology advancesments. All troops are available as tokens and can be placed on to the board via drag/drop.

Tracking resources are handled via three counters with +/- buttons. The board is set as per setup with 0 money, 3 favor and 0 philosophers. Increase/decrease via +/- buttons on either side of the corresponding item.

When a player wishes to perform research, click the appropriate button on their player board menu bar. This will provide the available cubes they may select from. Users can then select the desired research goal via right click menu on the corresponding cube. If one was chosen by mistake, please use the VASSAL undo button on the main menu bar. If the technology provides the additional action cube, this will be present the next time the 'End Round' button is provided.

These are critical for the game to work correctly for supply markers. When a player places a market outside their home city, they must place an Occupation Marker there to set the dominant faction there. Once the dominant faction for a region is set, the Market will then used to determine the new maximum number of Supply cubes for that player. If there are two Occupation Markers in a region, the domination will be set to be the last alphabetically ordered one there. I don't know of a way to prevent this, so I'm trusting players to know what's going on.

All troops have movement trails to you can see where they went. For multiple movements I'd recommend that you have the players stop in each territory to count as 'one' movement. Then you'll see the dots to enable everyone to ensure they didn't go crazy and moved 34 spots in 1 round. These are cleared at the end of each player's turn through clicking 'End Player Turn', as one would in COIN games.

To make any unit 'elite' just right-click on it and select 'elite'. They also have 'Return to reserves' to send them back to the appropriate stack on the appropriate player board.

Generals and Admirals have a 'Used' side, so you can turn it over to track that it's been used.

Units have a 'Used' indicator as well, this is available via right-click. At the end of the round these are automatically reset.

Retrieved from "https://vassalengine.org/w/index.php?title=Module:Hellenica:_Story_of_Greece&oldid=70311"
Categories:
This page was last edited on 9 February 2022, at 20:44.
Content is available under Creative Commons Attribution-ShareAlike unless otherwise noted.
This page has been accessed 459 times.
Privacy policy
About Vassal
Disclaimers