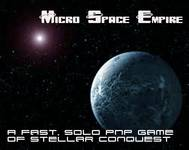 Micro Space Empire is a short, solo, “express” type game. It was an entrant in the QPnP (Quick Print and Play) contest.

Objective: The object is to survive and accumulate as many victory points as possible. Victory points are awarded for systems in your Empire at the end of the game, for technology that you researched, and for certain bonuses.

The rules are in the module. Also note that the module has a number of buttons to help the speed of play.

Retrieved from "https://vassalengine.org/w/index.php?title=Module:Micro_Space_Empire&oldid=61691"
Categories:
This page was last edited on 25 July 2020, at 22:29.
Content is available under Creative Commons Attribution-ShareAlike unless otherwise noted.
This page has been accessed 970 times.
Privacy policy
About Vassal
Disclaimers