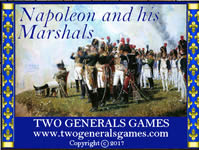 This is a strategic and operational scale game of the central European theaters of the Napoleonic Wars (France, Austria, Prussia, N. Italy, 1805-1815). Napoleon and his Marshals covers 1805-1815 in France and Central Europe. Other expansions are underway that will add the Peninsular War, the Patriotic War in Russia and maps of Scandinavia and the rest of Italy. The game is strategic and operational. Each strategic turn is two months, broken down into 6 10-day operational turns.Forces are division level (5,000 men) per factor, with artillery, cavalry, Cossacks, and guerillas as additional specialized units. Leaders are included at the National Military Leader (Napoleon, Kutusov, etc.), Army commanders, and marshals/corps commanders. Combat units for 11 nations are included. In the expansions the naval war is added, with Nelson, other British Admirals, along with French, Spanish, and Russian admirals, and the navies of those countries and Denmark and Sweden, along with the armies of Spain and Portugal.

Retrieved from "https://vassalengine.org/w/index.php?title=Module:Napoleon_and_his_Marshals&oldid=62398"
Categories:
This page was last edited on 26 July 2020, at 23:53.
This page has been accessed 307 times.
Content is available under Creative Commons Attribution-ShareAlike unless otherwise noted.
Privacy policy
About Vassal
Disclaimers