Module:Origins: How We Became Human 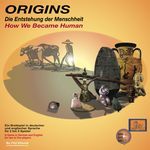 The game traces the development of early human species from 120,000 years ago through to the near-modern era. Players take the role of Peking Man, Archaic Homo Sapiens, Cro-Magnon, Neanderthal, or Homo Floresiensis, and each attempts to develop instincts and higher cortical brain functioning, such as language traits. The populations expand and collide, and eventually consciousness, society, and culture are sought after.

(Extension for Origins: How we became Human extends Bios to play Bios-Origins, or Origins alone. See Page for Bios Megafauna)

After loading the Bios module in vassal, right click and choose "Add extension..." and select the bios-origins extension. To play origins, bios module is required.

Retrieved from "https://vassalengine.org/w/index.php?title=Module:Origins:_How_We_Became_Human&oldid=61796"
Categories:
This page was last edited on 25 July 2020, at 23:09.
Content is available under Creative Commons Attribution-ShareAlike unless otherwise noted.
This page has been accessed 432 times.
Privacy policy
About Vassal
Disclaimers