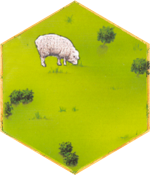 This VASSAL module is based on Pioneers (from http://pio.sourceforge.net/), which in turn is a fan implementation of a classic Eurogame. It supports the base game and first two expansions. I plan to add the variants from the third expansion eventually.

Version 0.6: Finally adds the city upgrade calendars. The second expansion should be fully playable! The red squares to the right of the P1 Calendar are for marking which calendars actually "own" the metropolis status for quick reference. Place them over the M icons.

Version 0.5.1: Fixes layers and has everything but the city upgrade calendar from the second expansion.

Version 0.4: Adds MOST OF the second expansion involving large cities and invaders that must be fought off by knights. Still need to add city walls, knights, and a mechanism for tracking city upgrades..

Version 0.1: Very rudimentary. The base game should be completely playable. The beginnings of the ship expansion and the knights-fighting-invaders expansion are in place.

Retrieved from "https://vassalengine.org/w/index.php?title=Module:Pioneers&oldid=61835"
Categories:
This page was last edited on 25 July 2020, at 23:20.
Content is available under Creative Commons Attribution-ShareAlike unless otherwise noted.
This page has been accessed 313 times.
Privacy policy
About Vassal
Disclaimers