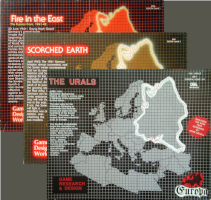 When you load the game, make sure you set the JVM heap to a minimum of 3072 otherwise you may get an "out of memory" error. This can be found under File - Preferences - JVM maximum heap (in MB). This is also described in the downloadable PDF file: "Instructions on playing the Computer Controlled Board Game Simulation of WWII, Scorched Earth ver. 4.54.pdf"

The available PDF downloads are as follows:

You will, most likely, be using these pdfs quite often. I recommend you print out these pdfs (you'll thank me later).

This module includes the original game, Fire in the East (FITE) which is required for play, and The Urals expansion gamette published by GRD in 1989. There are Scorched Earth campaigns starting in 1941, 1942, and 1943. Eventually there will be a number of smaller scenarios and the Barbarossa Unleashed campaign by John Astell. I will not be including Total War as someone else is working on that one. A number of the variant counters from ETO and TEM will be added. Currently included are the RR Engineers from TEN #7.

To update saved games with a module fix: Start the new module version and then your save game. Or start your save game with the new module. Choose Refresh Counters from the Tools menu. The upper 3 options should be checked and the bottom 2 unchecked. Press Run. Wait.

0.6.2 is quite beta. All game components are present as are most features but everything needs testing. The SE 1941 Campaign and the SE 1942 Start are playable right now, the rest are not.

0.6.2.1 moves the rest of the SS-Police to the correct tab. Changed some scenario titles that were confusing. Added empty maps in all three configurations or assemble your own configuration to facilitate player-designed scenarios.

Please Read the Module Help and the Hot Key Reference for instructions on the features. There are some features from VASSAL v3.5 in the module so some older versions will complain or say this is not a vmod. A JVM Max Heap setting of 1024MB was used in development. This might be the default VASSAL setting but check to be sure.

Retrieved from "https://vassalengine.org/w/index.php?title=Module:Scorched_Earth&oldid=69073"
Categories:
This page was last edited on 8 November 2021, at 23:05.
Content is available under Creative Commons Attribution-ShareAlike unless otherwise noted.
This page has been accessed 2,402 times.
Privacy policy
About Vassal
Disclaimers