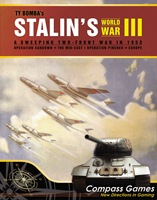 Retrieved from "https://vassalengine.org/w/index.php?title=Module:Stalin%27s_World_War_III&oldid=69876"
Categories:
This page was last edited on 8 January 2022, at 21:44.
Content is available under Creative Commons Attribution-ShareAlike unless otherwise noted.
This page has been accessed 828 times.
Privacy policy
About Vassal
Disclaimers