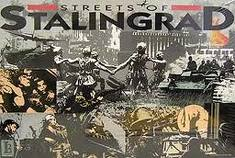 Complete rebuild, all scenarios in one module. Previous .vsav files will not be compatible. All charts, maps, and documentation included with the express permission of the copyright holder, Dana Lombardy.

Once placed on the map, these pieces should never move, which means also that they are unstackable. But that would make it impossible to first move them from the pieces palette to a setup chart, and only later to the game mapboard. So. In the pieces palette these counters are selected normally and can be freely moved (and cloned) to setup charts or a temporary location on the game map. Once in heir final location, there is a "Replace/Immobilize" trait which marks that the counter can never move, and - except for the tanks - enables the engineering construction feature.

When an engineer unit performs construction, the bridge/minefield/fortification counters have a BUILD/DESTROY trait, which activates a numeric layer that shows the number of phases remaining until construction is complete. When under construction, additional traits are available to increment or decrement the phases remaining layer as appropriate. When the counter has counted down to "1", at the end of the next phase, use the BUILD/DESTROY trait to remove the numeric layer which indicates that construction is complete. To remove a bridge/minefield/fortification, one can perform the action in reverse until the counter reaches 15 or 30 as appropriate, when the marker can be deleted. Note that for minefields, this means that unlike in the standard rules the minefiled counter should be initially placed adjacent to the engineering unit in it's final destination instead of in the same hex as the engineer.

Explosion markers are "built-in" to the Indirect Fire capable units. All units capable of Indirect Fire support a trait with hotkey Ctrl+I, that marks the unit as having fired (with a label/band across the middle of the counter) and pops-up at top-of-stack the associated explosion counter. The explosion counter can then be dragged to the target hex. Note that an entire stack of IF units can thus "fire" with one mouse click. Units labelled "FIRED" have the CTRL+I hotkey disabled until the label is removed. A map-menu button allows a user to remove all explosion markers on-map with a single click. Likewise, all "FIRED" labels can be removed at the end of a game turn with one click. If not playing solitaire, each side will need to press the button to remove "FIRED" markers. Stukas participating in an IF attack will respond to the remove explosion markers command by being automatically moved to the "Stukas Unavailable" box. Both Stuka and explosion counters have a trait to place an "INTERDICTION" label/band on the counter. When so marked, they do not respond to the "remove explosion markers" command; instead there is a separate command to "remove interdiction markers"

IF YOU DOWNLOADED THE 0.1 SoS MODULES, there was a problem with the images imported to VASSAL. When the ADC2 symbol name is used more than once, the importer uses one image for all. Consequently, many units in the VASSAL 0.1 modules display the wrong image. I have changed the symbol names in the ADC2 module and import the scenarios again -- 0.2 Series SoS Modules. You can replace the 0.1 modules with the 0.2 modules and continue your saved games (".vsav") with the corrected images. Thanks cgm, 8 Oct 10

As the "Size" thing above doesn't seem to work, the modules are about 36 MB. They may take a while to download.

The "0.2" modules replace the "0.1" modules that had incorrect images.

The "0.1" module versions replace earlier versions that did not have hidden units.

I haven't added charts/tables or rules for the game. That is a bit beyond what I am willing to do. Perhaps others may wish to do so.

VASSAL Streets of Stalingrad is imported from ADC2 scenarios.

The following Readme was made by Nick Bell for the ADC2 module. I have edited it for the VASSAL module. cgm

These modules incorporate all known errata through 28 Sep 2003 as provided by L2 Design Group.

The setup charts call for a 3rd Bn, 822 Arty Rgt, 300 Rifle Division. This is incorrect and the unit has not been included.

The countersheet is missing an ATR Company for the 650 Rgt, 138 Rifle Division. This unit is included in the setup.

Vehicle units capable of dismounting can be flipped to their dismounted side which reflects the reduced movement rate of 8, negating the need to mark them with Dismount markers (which are provided for both sides for those players wishing to use them). Yellow Movement Factors for the Germans or White Movement Factors for the Soviets indicate units which have dismounted.

Balka counter can be rotated (30 deg at a time) to point the arrow toward the indicated Balka.

Please review the Tray boxes prior to commencing play. Tray boxes have been created to hold markers and other common use units. Units are separated based on nationality, formation and/or arrival time.

Reinforcements are in Tray boxes

On map units have been placed on their respective setup lines or areas. Players must refer to the Scenario Setup charts for specific information regarding unit placement.

Miscellaneous Army and Corps level units not attached to formations are grouped separately and placed outside the setup areas for the Germans, and in the Volga River for the Soviets.

Formation Setup Lines and/or Scenario Boundary Lines can be turned off once initial setup is complete (View \ Hex Lines or Hex Sides).

Hidden units have been fully implemented in all scenarios. Hidden units are visible on map, but appear as generic Balkan Cross or Red Star counters.

The SoS was designed by Dana Lombardy with David Parham and later Art Lupinacci. The ADC2 module was created by Nick Bell and John Kincaid from art and graphics by Joe Youst and Art Lupinacci. The VASSAL importer was developed by Michael Kiefte.

I have received written permission from Dana Lombardy, the sole copright owner, to provide the VASSAL module for free download.

Note that I know nothing about VASSAL; so if you have any questions about how Vassal works ask elsewhere.

You are free to correct, edit, add to, or fix anything you can of the posted material.

Retrieved from "https://vassalengine.org/w/index.php?title=Module:Streets_Of_Stalingrad_(3rd_Edition)&oldid=65720"
Categories:
This page was last edited on 6 March 2021, at 20:12.
Content is available under Creative Commons Attribution-ShareAlike unless otherwise noted.
This page has been accessed 961 times.
Privacy policy
About Vassal
Disclaimers