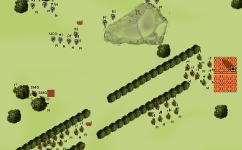 VASSAL Simulator for WW2 skirmish wargaming. 1 model is 1 man or 1 vehicle. The game scale is 15 pixels to 1 inch for moving and firing. 15 pixles to 1 metre for model scale. The present version covers up to late 1942 for British, German and Soviet equipment.

This module does not model any specific game and no proprietary rules are included. The module assumes ranges based on inches in multiples of 1 and 6 inches.

The images are based on those from http://www.juniorgeneral.org used with permission of the community with thanks to Skorpio, Dirk Schoenberger and Jon Oldham. The game will model movement, line of sight and game ranges but does not model any game rules and there is no concept of height.

The game will roll six sided dice. It will also model drawing of coloured (red and blue) chits from a bag to game player order. There is 1 blue chit already in the bag at game start.

When placed terrain can only be moved if selected with the shift key. Armour of different nations is or can be included but only 2 generic infantry piece sets are included. At this scale most infantry types are much the same. Unit types are labelled but it can be easier to indentify them if the rainbow base colours are used.

Retrieved from "https://vassalengine.org/w/index.php?title=Module:WW2_Skirmish&oldid=61952"
Categories:
This page was last edited on 25 July 2020, at 23:55.
Content is available under Creative Commons Attribution-ShareAlike unless otherwise noted.
This page has been accessed 869 times.
Privacy policy
About Vassal
Disclaimers