Module:War In The East: The Russo-German Conflict, 1941-45 (Second Edition) 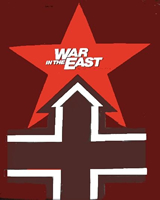 This was originally converted from an ADC2 module by Don Lazov.

NOTE: I made the counters in Cyberboard, and then copied and pasted them into ADC2. The map was created by someone named Jeff, I think, its been over a decade and a half ago. I imported his map into my Cyberboard version. I don't recall when my modifications for ADC2 went public. But if you look at my original Cyberboard game box and the ADC2 module you'll see the map and counters similarities. All that to say that Chuck did a fantastic job in porting it all to VASSAL and I am very glad he did so.

Retrieved from "https://vassalengine.org/w/index.php?title=Module:War_In_The_East:_The_Russo-German_Conflict,_1941-45_(Second_Edition)&oldid=69942"
Categories:
This page was last edited on 13 January 2022, at 14:02.
Content is available under Creative Commons Attribution-ShareAlike unless otherwise noted.
This page has been accessed 1,069 times.
Privacy policy
About Vassal
Disclaimers