Features and Controls in 3.0

Features and Controls in 2.2

Realignment: Activation will mark the country the target of a realignment attempt (fig. 3). Whenever a player activates the End Phase control or End Turn control, the Realigning country will reset its marked state

Fig. 3 â A country is the target of realignment

Coup: Activation will mark the selected country the target of a players intended coup (fig. 4). If the selected country also happens to be a Battleground country (fig.2) the Defcon counter track will automatically degrade 1 level also. Whenever a player activates the End Phase control or End Turn control, the Couped country will reset its marked state

Fig. 4 â A country is the target of a Coup attempt

Brush War: In addition to the Realignment and Coup options in the Action sub-menu, Countries with a stability of 1 or 2 will also have the added selection of Brush War. This marks the selected country the target attempt of the card 'Brush War' when it enters play

A country is the selected target of a Brush War

This sub menu provides a means to mark which side (or none if neutral) controls during the course of the game. There are 3 possible selections: Neutral, US control and Soviet control. Activating the appropriate side will cause the Control at a Glance track on the right side of the map to automatically update for ease of scoring.

Fig. 5 â A country that is neutral

Fig. 6 â A country under US control

This sub-menu is where players will increase or decrease their influence on the selected country. For each side there is also a âresetâ selection which will automatically remove all influence from the country of the chosen side.

In most cases players will manually control this function. However there are some instances where card events will automatically take care of these functions on a specific country the card refers to in its text. Players should take care to note any reports in the chat window that may announce these automatic effects. The affected automated cards are explained later in greater detail.

The Military Ops Counters are for the most part automated (self updating) as players play cards that add Op points, attempt a Coup etc. When a player activates the End Turn control, the Mil Ops counters will reset their state back to 0

Whenever a player activates the End Turn control, the DEFCON counter will adust itâs level by 1 towards peace automatically

Be forewarned there is no recourse for moving back a spot on this track, so only advance the track carefully 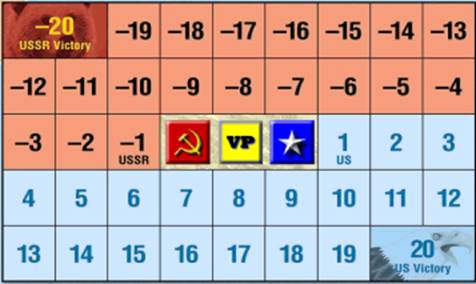 The VP tracker is partially automated by play of certain cards (see affecting cards below). Otherwise for all other purposes such as scoring, the VP tracker has a right click menu that allows the players to select (up to 9) how many Victory points to adjust the tracker to reflect the current score. This is the only method the track can be altered. The tracker is locked to prevent players from moving the marker manually.

Action Round and Turn Tracks

The Action round and Turn tracks are automated by their associated controllers (Fig. 16 & 17) located on the main menu bar. Activating their respective controller will cause the tracks to advance appropriately, as well as update and reset any other affected counters (as explained above). There is no other method to changing these tracks so care should be taken before activating them that a player is ready to proceed. The End Turn controller (Fig. 17) should only be activated by the player controlling the US side when both players agree the turn has ended to prevent the Turn track from accidently moving forward âtwo turnsâ and affecting the DEFCON counter inadvertently. 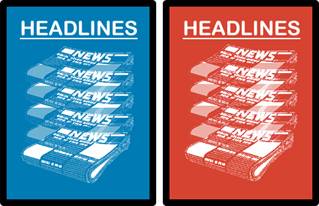 The Headline Zones (Fig. 18) is where players will place the card they wish to use for announcing the headline at the beginning of a turn. 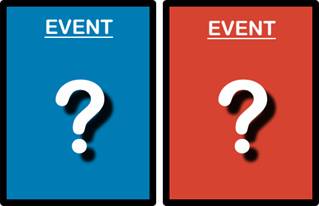 The Event Zones (Fig. 19) is where players will place the card they wish to use as an event during play. Depending on the card certain extra commands may be available to the card once it is revealed in these zones for further automated effects 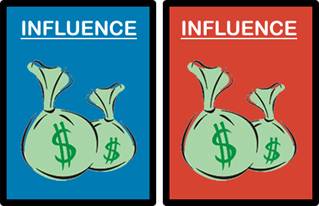 The Influence Zones (Fig. 20) is where players will place the card they wish to use as influence during play. Depending on the card certain extra commands may be available to the card once it is revealed in these zones for further automated effects. 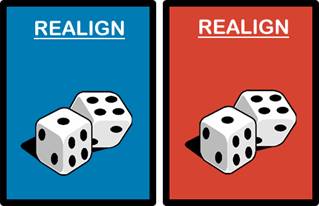 The Realignment Zones (Fig. 21) is where players will place a card they wish to use attempting to Realign countries during play. Depending on the card certain extra commands may be available to the card once it is revealed in these zones for further automated effects. 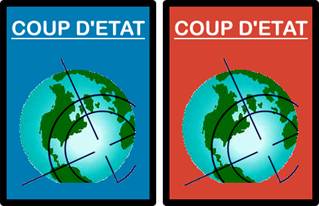 The Coup Zones (Fig. 22) is where players will place a card they wish to use attempting to Coup countries during play. Once a card is revealed in the Coup Zone that playerâs side Mil Ops track will automatically update according to Ops value of the played card in the zone. Depending on the card certain extra commands may be available to the card once it is revealed in these zones for further automated effects. 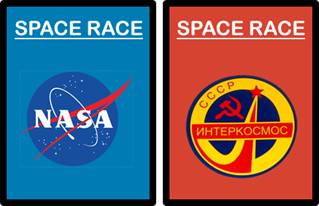 The Space Zones (Fig. 23) is where players will place a card they wish to use attempting to advance their Space race Track during play. No extra commands are available to a card that is revealed in these zones for further automated effects. 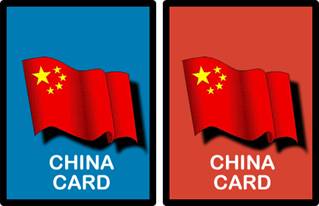 Finally, there are 2 other card placement zones (not shown) labeled âCards in Effectâ. These Zones are used to place cards that have effects that last through the end of the game turn, end of the game, or until cancelled by another effect as no markers of card effects are provided in this module. Players should keep constantly aware of cards that are placed in this zone that may affect the basic automations built into the module in case corrections are necessary (example âRed Purgeâ as explained above).

The option control selector (fig. 25) is used to announce if a card with an opponentâs event is played by a player in a zone (excluding Space Race), whether the player will choose to conduct his operations normally first or prefer that the Event take place first.

Whenever it is time to execute the event, either before or after the phasing playerâs ops, the player that benefits from the event should become the controlling player temporarily of the card and activate any special commands (if any) are available on the card or resolve the event normally.

The heart of the game, and also, where this mod becomes more complex. Users need not use the advanced features programmed into the cards to still use the mod. They have been created to speed up pace of play and will continue to evolve as the Vassal engine allows it to.

Whenever a player draws a card, he automatically becomes the cardâs owner and the card will automatically change its state from Hidden (fig. 26) to Masked (fig. 27).

The cards are manipulated by dragging them about on the screen and placed where a player wants them. Control of the cardâs state is accessed by right clicking the card once it is placed where the player wants it. All cards contain all or some of the following commands:

This is all that is needed to play the cards and still manipulate all aspects of the playing board manually.

A lot of the playing cards will have preprogrammed automated events in them that are only available in the right click menu depending upon which zone the card was played in. Players using these mechanics should always let the player that benefits from the execution of the event operate the card regardless if they are not the cardâs owning player. This is so that the reporting functions will read correctly in the chat window.

These advanced features will automate various functions on the gameboard such as the Mil Ops tracks, Defcon Status track, VP track and even sometime Influence placement on countries. The chart below shows the cards that contain the automated features, and what their effects are. This will be constantly updated as more are programmed, and/or the capability to do so is enabled 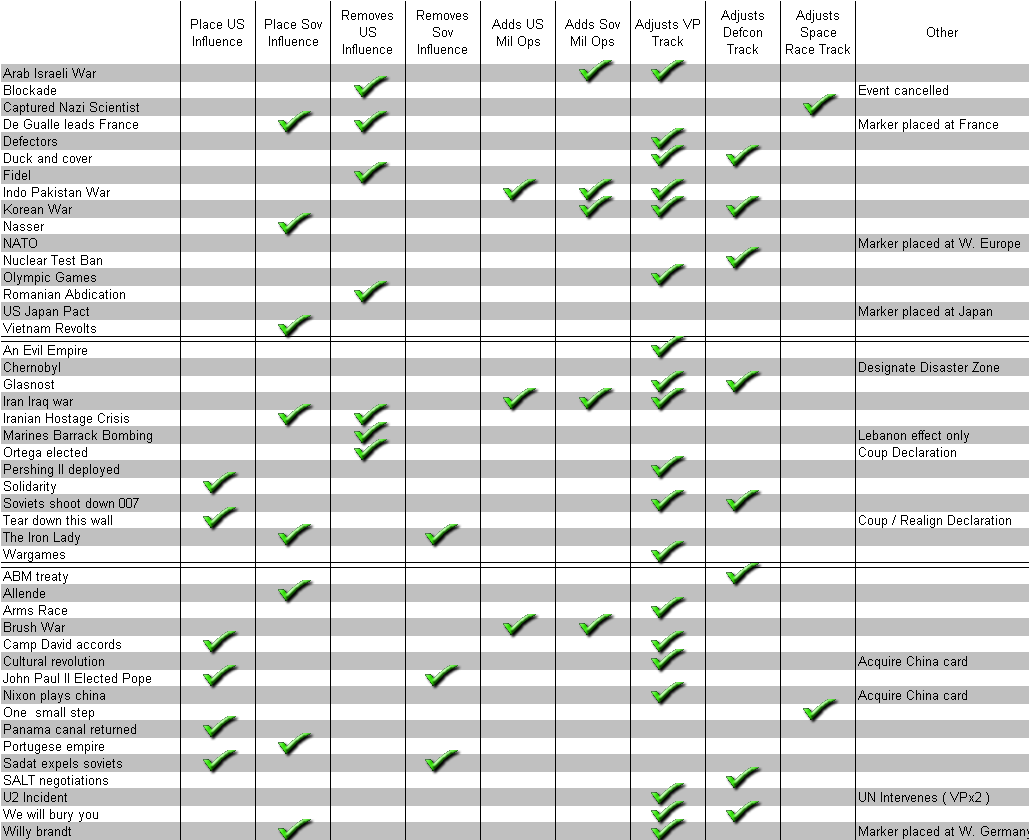 Comments from the peanut gallery: Very, very nice Wiki page! This looks like it will be one of the flagship Vassal Mods. Thanks to you all; I may have to go buy the game and play it! -- Carrington Ward

I use the mod to play PBEM, but we hit an issue at the end of the turn when the deck will run out - we obviously want to get half the remaining cards each but there is not an easy way to do this without drawing a card at a time per email. Is there any way to tell how many cards are left in the draw deck? -- Ben

Retrieved from "https://vassalengine.org/w/index.php?title=Module_talk:Twilight_Struggle&oldid=58140"
This page was last edited on 25 November 2019, at 21:43.
This page has been accessed 90 times.
Content is available under Creative Commons Attribution-ShareAlike unless otherwise noted.
Privacy policy
About Vassal
Disclaimers