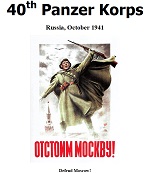 40th Panzer Korps is a company/battalion level simulation of the battles in the vicinity of the old Napoleonic battle ground of Borodino just west of Mozhaysk. The players control the 40th Panzer Korps and elements of the Soviet’s 5th Army. The game uses the 48th Panzer Korps system, which emphasizes the special abilities of the various arms, armour, infantry and artillery.

This Vassal Module does not contain the charts or setups and user must possess those in order to play the game using the Vassal Module. Thanks to Chris Harding for creating the game and for his permission to create the Vassal module.

Retrieved from "https://vassalengine.org/w/index.php?title=Module:40th_Panzer_Korps&oldid=60919"
Categories:
This page was last edited on 24 July 2020, at 22:04.
Content is available under Creative Commons Attribution-ShareAlike unless otherwise noted.
This page has been accessed 903 times.
Privacy policy
About Vassal
Disclaimers