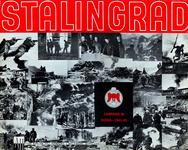 The Avalon Hill classic of the turning point of World War II. The module uses board and counter art by John Cooper.

The Base10 extension adds an optional combat table based on the roll of a 10-sided die.

Plus version "Original Art" incorporates 17 Russian Setups used by masters of the game. (My inspiration derived from Stalingrad's ZunTzu gamebox.)

NOTE that Stalingrad OA with AH hex numbers (Version 3.2) has a custom code "Out of Date" message but just ignore. (Click "Do Not Show This Again") but it does have the original Avalon Hill oblique hex numbering system incorporated.

WGA 160210: Still working on resolving oblique (diagonal) hex id's to enable correct logging of movement. This is resolved in WGA Afrika Korps module via custom java code many years ago. I seem to be unable to import the class successfully into this module; my java programmer is no longer accessible.

Retrieved from "https://vassalengine.org/w/index.php?title=Module:Stalingrad&oldid=68124"
Categories:
This page was last edited on 1 August 2021, at 20:17.
Content is available under Creative Commons Attribution-ShareAlike unless otherwise noted.
This page has been accessed 2,482 times.
Privacy policy
About Vassal
Disclaimers