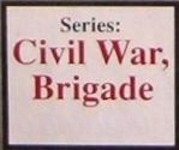 The intent of this series is to focus on the command aspects of Civil War combat by having players use a game command system that mimics actual events. The game forces interact with each other in ways that simulate the functions of those they represent.[...]

Each hex on the game map equals 200 yards of real terrain. Each day-time turn represents 30 minutes, each night turn one hour. The vertical scale between contours is 30 feet. Infantry and cavalry units are brigades, artillery units usually 16 gun battalions. A strength point of infantry or cavalry is 100 men. A gun point of artillery is roughly 3 cannons.[...]

Orders are the heart of the main command system of this game series. Players prepare orders in writing as instructions to the corps (generally) as to what they are to do. An order is not a hex by hex record of movement. It is the actual wording in the same form as the historical orders."

The following 15 pages are in this category, out of 15 total.

Retrieved from "https://vassalengine.org/w/index.php?title=Category:Civil_War_Brigade_Series&oldid=45951"
Category:
This page was last edited on 17 November 2015, at 17:16.
Content is available under Creative Commons Attribution-ShareAlike unless otherwise noted.
This page has been accessed 535 times.
Privacy policy
About Vassal
Disclaimers